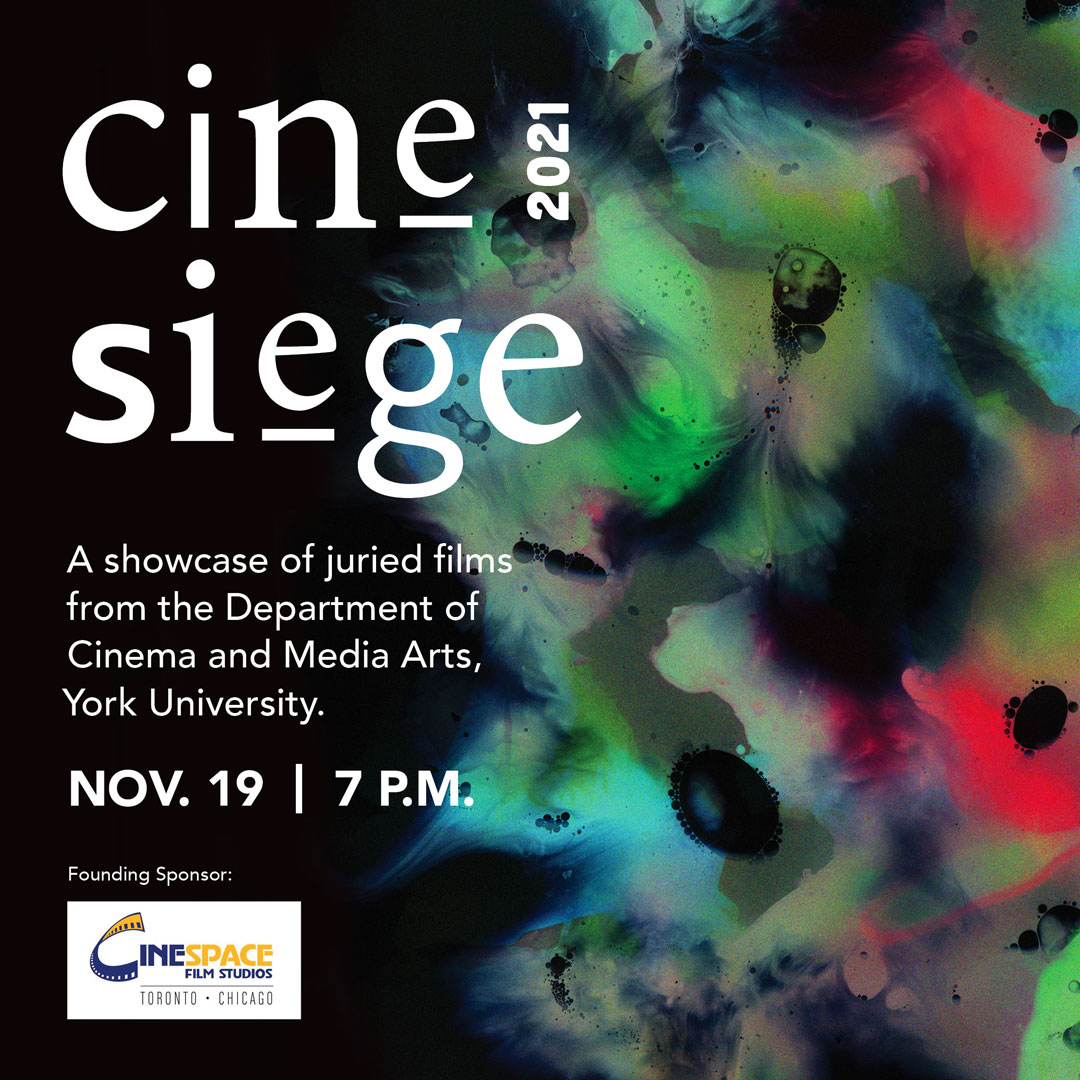 In its 19th year, CineSiege will continue to celebrate cinema online on November 19, 2021, at 7 PM. The festivities are open to AMPD community members and film lovers alike.

CineSiege features a juried selection of shorts chosen by program alumni and leading practitioners in film and media culture. Professors’ shortlist nominated films from all 200 films produced by students from all levels of the program in 2021. The nominated films include fiction, documentary and alternative works. Those chosen for CineSiege are honoured for their exceptional achievement in the art and craft of cinema.

CineSiege is made possible through the generous support of our founding sponsor, Cinespace Film Studios, as well as the Mirkopoulos family for their outstanding contributions to our students, our school and the larger film community.

Year I and Year II films will compete within their year and category, with outstanding features selected by film production faculty.

30 Days by Michael Speciale & Maya Danou
My Girl, Skelly  by Abraham David
The Well of Fortune by Daniella Castillo

An external jury of filmmakers, producers, critics, programmers and alumni will select the winners in the following categories amongst all year III and year IV films – the best fiction film, alternative project and documentary, as well as outstanding director, screenwriter, cinematographer, editor, sound designer and production designer.

Category: Documentary
Encrucijadas (Crossroads) by Rosa Urias
Metal on Ice by Brendon Kenney
My Girls by Desiree Falcao
On the Horizon by Bailey Johnson
Perfect Timing by Marissa Wheler
Talks of Faith by Melissa Affrunti
Trial of the Great Forger  by Yehor Vozniuk

Category: Alternative
the Affirmations of Anywhere by Cole James
Empty Spaces where you’ve been by Kendra Howden
Fellow Travellers by Brian Alonso Ojeda
I’d rather miss out on a Tuesday by Stefano Terrana
Meander by Dous’R, aka Ferdous S. Rahman
Now They’re Just Lines by Siyao Guo
Pronouns by Rowan Elliott

Category:  Fiction
ALIEN COP by  Will Sheppard and Hayden Gallagher
Bookie by Sebastian Vives
Cleanliness Is Next to Godliness by Nicolas Collier
Coming by Honestly by Paul Villenave
Cuckoo by Rebecca Fadoju
A Date by Farhiya Ahmed
Going Up Standing Still  by Carly Balestreri
In Other News by Ivan Oussa
Sugar  by Dylan Posgate

To view last year’s nominees and winners, as well as other student films, check out AMPD’s YorkFlix – a hub of student creativity.

CineSiege is made possible through the generous support of: